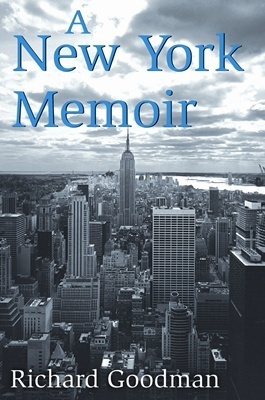 "Why I Live in New York City," from A New York Memoir

It is a sweltering summer in August. Everyone with any sense has abandoned the city. Not you, though. You not only stay, you like it. It’s difficult to romanticize three-day old garbage in August heat. Still, you’re not appalled by the scent. Far from it. You think that if someone hasn’t spent a sweltering summer here then they will never know it completely.

You are living in the East Village. It is 1985. The hot air sucks the breath out of you, and hits you in the stomach. The heat is so fierce you have oasis shimmers in the back of your eyes, and you walk like a man with terminal heart disease. It is so hot, you have to be careful about touching street lamps. You are sitting on a stoop of a brownstone apartment next to people who live there. Some you know, some you don’t. The heat has forced you all out on the street. You are living in Elmer Rice’s city and in Weegee’s city and in Henry Roth’s city, a world you love, of ordinary people from another era. There you all are, men and women, some younger, some older, all depleted from the heat, the women struggling against the despot of modesty, the men in armless T-shirts, or bare above the waist.

You see pretty young women, normally vigilant about buttoned blouses and the high water mark of skirts when they sit. They abandon all decorum. They have hair that sticks to sweaty necks, and the backs of the blouses are damp and flat against their back and the high backs of their skirts are damp and even the inside of their thighs, showing wonderful maps of desire, and so many blouse buttons are unbuttoned you believe in Santa Claus again. And when they sit on the stoops they pull their skirts up high for any possible breeze, and this approaches the total sheet-discarding indifference of childbirth.

Here on this stoop in the heat you encounter the oral tradition of storytelling from these urban griots. In the sultry evening, you listen to the man who went to parties where Kerouac sat on a couch and Ginsberg was there as well as Corso. What did they say, you ask? What where they like? You listen to the aged black superintendent who proudly says he saw Joe Lewis knock out Max Schmelling. And you say, you mean you were in there? And he says, yes I was. And someone heard Emma Goldman speak once, in Union Square. You don’t know who Emma Goldman was yet, but you nod appreciatively. Here, everyone is a storyteller, and that’s what you want to be, too. You are part of this oral tradition now, and the storytellers have cans of Schaefer beer and panting dogs and cigarettes glowing in the late evening, and you could listen all night, all night long.

"Like many, Goodman moved to New York City in search of a home, a place in which he might feel comfortable and thrive. He found it "against the backdrop of a massive city of unmatchable energy and sheer, brute authority." In this tribute to Goodman's home of three decades, he shares extraordinary events and everyday occurrences, like the theft of his prized bike, a "Raleigh three-speed, English, heavy, black, and one of the most remarkable machines I've ever had. It was no effete, high-strung, ten-speed from Italy or Japan." He mourns the devastation of 9/11, but also celebrates the connections he's made, particularly to Ann Silberling, a Greenwich Village neighbor, one of those cosmopolitan women who "give the place a consistent dignity by their dress, decorum, and demeanor. They demand respect, and by their savvy, grace, and deep understanding of how to encounter New York City, they get it." Sections set outside New York, such as his description of restaurant work in Cambridge, Mass. or a year spent in France, fit awkwardly, a few misses in a thin volume of genuine hits."

French Dirt: The Story of a Garden in the South of France
"I possess a deep prejudice against anything written by Anglo-Saxons about their lives in or near French villages. So, Richard, I thank you for breaking the spell. I like very much what you wrote."
–M.F.K. Fisher

"Goodman borrows a plot of land on which to grow a garden, a project that his neighbors view first with curiosity, then with sympathy and a deepening sense of involvement. There's a genuine sweetness about the way the cucumbers and tomatoes bridge the divide of nationality."
-Francine Prose, New York Times

A New York Memoir
"One can learn much from this man who feels tender toward cobblestones and old women, nostalgic about a daughter's childhood, frightened at the prospect of dying alone—a rare individual who, with honesty, sensuousness, and keen observation, turns yearning and remembrance into art."
–Susan Vreeland, author of Girl in Hyacinth Blue


"Richard Goodman is one of the most generous and astute literary guides I've read. This book is a gift to writers."
–Rebecca Walker, author of Black, White and Jewish


"This book is not just for writers then, but for lovers of words and writing. For renewing my excitement about what I've chosen to do for a living, this book deserves thirteen exclamation marks".
–Stephanie Dickison, The Writer