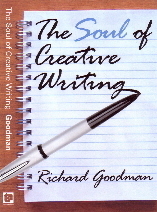 Praise for The Soul of Creative Writing

"Who needs another book on writing? If it's this one, you do. Richard Goodman examines—with the same curiosity, wit, and good sense that characterized his gem of a memoir, French Dirt—the soul of the writer's life. I loved this book and will keep it nearby when my own well has run dry and I need inspiration, prodding, or reminding that writing is both vocation and delight, worthy of a life's dedication."
---K. L. Cook, author of The Girl from Charnelle

"Any writer should read all these delicate, dear essays who wants to write anything better than she or he has done before, be it fiction, essay, poem or merely sentence." ---Sena Jeter Naslund, author of Ahab’s Wife

"The Soul of Creative Writing is a wonderbook of meditative instruction. Goodman’s sympathy for the writer’s dilemma, the warmth of his urging, the brightness of his enthusiasms all remind us that courage lies inside encouragement. Like the best teaching from the most inspired teachers, it’s simply invaluable."
---Molly Peacock, author of The Second Blush

"If every writer knew and loved words the way Richard Goodman knows and loves words, the world would be a far better place."
---Erin Kean, editor, Verbatim

"The Soul of Creative Writing will be useful to writing teachers in all genres as a springboard to conversation about the choices writers make."
---Nancy Jensen, author of Window

The Soul of Creative Writing

From Chapter One, “The Music of Prose”:

“Stories do not give instruction, they do not explain how to love a companion or how to find God. They offer, instead, patterns of sound and association, of event and image."

—Barry Lopez, About This Life: Journeys on the Threshold of Memory

Language is sound by which we communicate. You could say it’s organized sound. Or patterned sound. Or sound charged with meaning. But it’s still sound. You listen to me speak, and you’re listening to sound. But it’s variable sound. It’s sound with—pauses. With emphasis. With, well, you know, a certain rhythm.

In writing, the kind of sound the writer makes on the page is crucial to our liking his or her prose, or not. When we read prose, we hear it. As Eudora Welty wrote in One Writer’s Beginnings, “Ever since I was first read to, then started reading to myself, there has never been a line read that I didn’t hear. As my eyes followed the sentence, a voice was saying it silently to me.” How prose writers are different is, among other things, the sound they make on the page. The sound of Raymond Carver on the page is very different than the sound Henry James makes. A sentence is far more than information.

In another way of speaking about this, Jean Cocteau said he knew Shakespeare was a great writer, even without knowing a single word of English. He could hear it in the sounds the words made.

At the highest level, the sound a writer makes on the page is music.

So you can say writing is music we can all read. Instead of clef notes, sharps and minors, full stops or half stops, and all the other symbols actual music employs, English has letters, syllables and words. It has many methods by which to control the sounds it produces. Some of these methods are subtle and require great practice to use them expertly, like playing an instrument well requires dedicated practice. What order the words are placed in the sentence can determine what kind of sound, or melody, emerges. However, that sentence will not stand alone and must be taken in context with others sentences, so its individual music may be sublimated to the larger melody of the paragraph. Punctuation is another determiner of what kind of sound the sentence makes and how it makes it. For example, I can. Make. You. Read. At. The. Pace. That. I. Want. You. To. Simply. By. This. Little. Dot.

In fact, the English language is an enormous musical instrument. It’s made up of words which are in turn made of syllables that are stressed or unstressed. So right there we have a basis for music—dissimilarity. It is this simple concept—stressed and unstressed syllables—that is at the heart of it all. The words, and stresses, are placed in combinations and orders that produce a kind of melody. Think of the famous opening to Beethoven’s Fifth Symphony: Dah dah dah dah. So much of the drama comes from the simple idea of the last note’s heavy stress. Despite what Molière had his bourgeois gentleman say, we actually speak quite often in poetry—in iambic pentameter, or blank verse. Or some version of stressed/unstressed syllabism. The music of prose has, in its own way, the variety, scope, shadings, colors, melodies and drama as music that is played on instruments.

Why are we concerned with music in writing at all? Because we are musical. We are essentially musical, we humans. We are musical for the simple, profound reason that we have a heart. From the moment we’re born—no, actually, before we’re born—we have a steady, consistent, basic beat of our heart inside us: ba-bump ba-bump. Our blood surges and retreats, like a tide. So inside us we have an unstressed and stressed beat, the basis for music, a pulse. I believe that’s one reason why we respond to music and seek to create it. It comes naturally, by way of our own body.

The two main elements of prose are music and the meaning. It’s a little artificial to talk about the music of prose without talking about meaning, as well. It’s a bit like talking about the melody of a song without its lyrics. That’s really half a song. In reality, the prose writer’s task is to balance the two, and that balance may be equal or unequal, depending on the desired effect and on the relationship with other words and sentences. Sometimes music takes a back seat to meaning, sometimes meaning has to move over for music. That’s one reason why a good writer has to have a good ear.

Cleanth Brooks asked Robert Frost about music in writing and its origins:

Frost replied, “No, it’s doggerel when you do that. You see, and how you save it from doggerel is having enough dramatic meaning in it for the other thing to break the doggerel.”

Good prose is musical. Like actual music, it can be lyrical, tender and soft. It can be dissonant, harsh, blunt. It can be grand. It can be simple. It can be comic or tragic. It employs many of the same methods as actual music: rhythm, harmony, counterpoint and balance. It can produce sounds that, at the highest level, have a unique melody. Take the beginning to Charles Dickens’ A Tale of Two Cities, “It was the best of times, it was the worst of times.” Why is that sentence remembered by practically anyone who reads it? It’s not because of the content. It’s because of the music. Every fine writer produces a kind of music with his or her writing. It’s also called style. A great writer will almost have us humming the melody he or she makes on the page. Great writers are great composers.
Writing exercises based on The Soul of Creative Writing (created by writer Nancy Jensen, author of "Window"). (4.83 KB)
The Writer Magazine reviews The Soul of Creative Writing in its October 2008 issue. (323 KB)

French Dirt: The Story of a Garden in the South of France
"I possess a deep prejudice against anything written by Anglo-Saxons about their lives in or near French villages. So, Richard, I thank you for breaking the spell. I like very much what you wrote."
–M.F.K. Fisher

"Goodman borrows a plot of land on which to grow a garden, a project that his neighbors view first with curiosity, then with sympathy and a deepening sense of involvement. There's a genuine sweetness about the way the cucumbers and tomatoes bridge the divide of nationality."
-Francine Prose, New York Times

A New York Memoir
"One can learn much from this man who feels tender toward cobblestones and old women, nostalgic about a daughter's childhood, frightened at the prospect of dying alone—a rare individual who, with honesty, sensuousness, and keen observation, turns yearning and remembrance into art."
–Susan Vreeland, author of Girl in Hyacinth Blue


"Richard Goodman is one of the most generous and astute literary guides I've read. This book is a gift to writers."
–Rebecca Walker, author of Black, White and Jewish


"This book is not just for writers then, but for lovers of words and writing. For renewing my excitement about what I've chosen to do for a living, this book deserves thirteen exclamation marks".
–Stephanie Dickison, The Writer